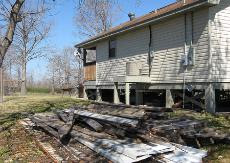 James Majors' Hillebrandt Acres cabin would not have flooded if surveyors who established his property's elevation had done their homework, the homeowner said.

Majors, 43, of Port Neches, will present a complaint against Soutex Surveyors, Inc. of Port Arthur to the Texas Board of Professional Land Surveying for issuing an incorrect elevation certificate for his home on Hillebrandt Bayou in 2003.

The surveyors acted in good faith, the company president said, but the error may be rooted in a natural phenomenon discovered last year.

"I want someone to hold up to their objectives, to say, 'I made a mistake'," Majors said by phone Thursday.

In 1996, Majors hired Soutex to complete a property survey for his cabin in the Hillebrandt Acres subdivision near the LaBelle area in unincorporated Jefferson County. Before building a cabin on the property along Hillebrandt Bayou, he wanted to find the property's elevation above sea level so he could research the historical floods that hit the area and build above that point.

The survey placed his yard at 10 feet above mean sea level, according to his complaint, and in 2003, he began building almost 3 feet higher than that to rise above the historical flood level in the area.

In July 2003, Soutex created Majors a final elevation certificate he could file with Jefferson County to receive final permits, placing his home's bottom floor at 12.9 feet.

At that level, the Hurricane Ike storm surge should have hit more than a foot below the cabin's bottom floor.

Majors contacted Soutex to ask about the discrepancy, and the survey company's president, Anthony Leger, told him about other homes in the Country Road Estates area across Hillebrandt Bayou that had similar problems.

Dozens of homes in the LaBelle area were lower than their elevation certificates said, and after the storm, many were too low to get building permits from Jefferson County, because they were below the 100-year flood plain. Majors' home was above the 100-year level. Still, the storm surge pushed more than a foot of water into his house.

For 30 years, property elevation in the area of Country Road Estates and other homes in the LaBelle area had been produced using data from a federal monument - a brass disk - placed a little more than two miles northwest of Port Acres, Leger wrote in a letter to Jefferson County in May 2008.

Federal surveyors checked the area again in the early 1980s for FEMA flood maps, and the benchmark's elevation was 3.1 feet lower.

Professional surveyors cannot take the time to establish mean sea level each time they shoot a survey, Leger said, so they rely on government data from the hundreds of thousands of benchmarks across the country. The benchmark's level remained too high in the government record.

Leger said the benchmark's level could account for incorrect elevations throughout LaBelle. When he learned of the problem in spring 2008, he wrote a letter to the county.

The benchmark's elevation change may be caused by subsidence - the sinking of soil often caused by oil drilling or groundwater pumping in an area. A 1983 FEMA flood study said in the area where the benchmark lay, "the subsidence is about 3 feet."

"I did my homework (while building the house)," Majors said. "Why didn't they do theirs?"

Surveyors rely on published data from the monuments, Leger said, unless the benchmarks prove incorrect.

"It's a normal practice, yes, sir," Leger said. "It's just unfortunate that LaBelle is in that situation."

The surveying board will meet at 9 a.m. in Austin and may issue its findings at a later meeting. The board can revoke or suspend surveyors' licenses.
Posted by San Joaquin Valley Chapter CLSA at 22:50

Labels: Current Events, Out of State

Promote Your Page Too

Choose Your Path, Make Your Mark